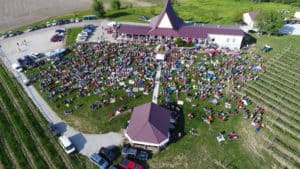 Blues Festival Nirvana. Wow. Such a gorgeous day for a daydream… I mean a Spring, Wine, Beer, Blues, and Balloon Festival. The only hitch were the winds that prevented the balloons from launching. We were able to get a balloon in the erect position, fully inflated, to do a glow. It was nice. We were near capacity this year and the lineup was absolute killer. If you like Blues you will seldom see a better show than what we had. The crowd was rocking! Things ran very smoothly as we had much larger staffing than last year when we sold out and had to turn hundreds away. Thanks to the Nebraska Balloon association and Steve LaCroix, who year end and out, has helped us do the balloon side of the event. Also great Kudos to the Omaha Blues Society for lending their volunteer support to what has now become one of the best Blues events in the Midwest. AS the organizer this was the best event in 14 years, and we have had some good bands in that time. Don’t miss next years event.

Also, on July 21st we have our first ever Tribute Festival. This years bands will feature a Beatle Tribute Band, A Fleetwood Mac/ Stevie Nicks Tribute Band, and an Elton John Tribute Band. They all sound amazing.